Winnie Linet, 21, has battled odds to stay in schooland excel in academics. Born and raised in Kibra Slums Nairobi to a single parent, Winnie was orphaned at an early age, rendering her homeless, but her school offered to accommodate and giveher education. Earlier, she often missed classes due to her inability to pay tution fees. But in 2013, during the International Day of the Girl Child celebrations at Olympic Mixed Secondary School in Kibra, Winnie was introduced to the NEWI founding trustee Eve Obara, who offered to sponsor her through secondary school, a pledge she kept. She joined NEWI and Herstory Initiative’s LitClub in March 2015, quickly rising to become an influential memeber of the LitClub, shedding her previously shy nature and became more confident. A strong willed personality determined to make it despite hurdles, Winnie has never stopped to dream. She is friendly in character, highly intelligent and is a top student at her school. At its inception, the Olympic School LitClub had began with the Read Aloud sessions where each student read a oassage to others, helping members to gain-more confidence that made Winnie to stand out in community building sessions. She identified songs and plays that set the mood for the sessions. She was enthusiastic, earning her cordination role at the session, whic, she says, required frequent consultation with the mentor to establish if the proposed ideas were to tanden with the recommended curruculum. She often shared her storoes and encouraged other girls to speak put. Her commitment is great and on various occassions taken charge of tearcher mentorship sessions. In 2017, when the teachers downed tools aver an industrial dispute with the government, Winnie took charge of the LitClub, holding sessions with students in the three weeks of the strike. She encourages felllow students to join the club to buld their confidence levels and nurture a positive attituide towards life. The school sdministration recognised her improvement and gave her leadership role. As a leader of LitClub, she was a symbol of hope and a menber of the school girl’s football club that competed in national events. Winnie scored a mean grade of D+ in KCSE and proceeded to African Digital Media Studies where she did a certificate in Jounalism and Media Communication, she later went to Zchetech University and did a certificate in Media studies. Currently in her second year studying diploma in Jounalism and Media Communication at Tangaza University. She works as a volunteer at Heart to Heart Orphans & Childrens Centre in Hurlighum, where she writes and manages the profiles for children seeking support from donors and well wishers, she manages their social media account too.

Modecai Rhobi, 21, was a student at Moi Nyabohanse Girls Secondary School and a LitClub member. Raised among the Kuria tribe, she had a strong personality and aware of values that girls must uphold within their community, including right to education. ‘’As long it is a constitutional right, every girl should pursue education’’, she says. Her community practices female genitalmutulation (FGM) and early marriage, which hinder girls from development in Affrica. Rhobi joined LitClub in March 2015 in her school and has since distinguish herself as one of the leading lights. Prior, she was a shy girl who barely expressed herself in class. This changed, and often, she would take a lead role in Lityclub tasks. Her performance in class also improved, cementing the contribution of the mentorship offered at the Litclubs. She won three awards, receiving gifts from NEWI team for oustanding performance and a shining example to the girls. She scored a mean grade of B - in her KCSE and currently a fourth year student pursuing Barchelor of Commerce, Finanace option at Baraton University. 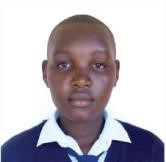 Deniver Awino, 22, was a member of Lit Club and a the deputy president of Got-Rateng’ Secondary School, in Kabondo -Kasipul, Homabay County. She was hard -worker and disciplined student who shown commitment to the activities of the Lit Club, where she developed a roaster for group sessions, bringing together 89 students once a week to read loud inspirational stories, and share thoughts and experiences. An organizer, Deniver ensures all Lit Club sessions are planned in advance, thereby saving time. She is outgoing and couragious, two traits that have inspired other girls when she occassionaly steps in as a mentor at the Lit Club, taking charge when the teacher mentor is out. Her warm nature, free spirit and problem - solving skills, ensured unity and team work in their Lit club. Lit Club Sessions have imbied in her leadership qualities, earning her an elective position of deputy president. Although she lost her father, she lived with her mother in the rural village, she stood out as a student focused on a meaningful future for herself and felow students. She got a mean grade if D+ in her KCSE, currently pursuing Fashion and design in Kisumu Polytechnics. Her training is interrupted due to the regulations put by the government to contain Covid-19.

Magdalene Were. 22, was a student at Mark Matunga Kiwa Mixed Secondary School, a statellite institute attached to the Mauta Secondary School LitClub. A native of the Suba tribe, she was raised in poverty by her parents at Gwassi, Homabay County. Due to hardwork and commitment, Magdalene was able to excel in studies, securing an admission to Secondary school at Mfang’ano Island of Lake Victoria. She was member of the school girl’s football club and a choir member at her local church. When Litclub was introduced to the School in 2015, she joined the and the session enabled her build confidence, gain hope and fostered her commitment to education. Her academic performance and attitude towards education improved, could express herself better, helping her to actively participate in LitClub sessions and mentor other girls in her community. She later became a prefect in her school. Magdalene proceded to Kisii Polytechnic after attaining a mean grade of C- in her fourtgh form. She is currently pursuing Diploma in Supply and Chain management.

At NEWI, we believe in the power of mentorship and volunteerism, and are passionately working with girls, teachers & Community leaders.

NEWI Kenya offers volunteer opportunities to both the youth and adults.